Simulating an ALU in F#

I’m a rank beginner with F#, and I was looking for a fun way to get started. The usual tutorials seemed a little stale. Then it occurred to me that logic gates could be modeled as functions pretty easily. Why not practice F# by writing some functions that mimic the behavior of logic gates?

The first step is to set up the project. After creating a root directory for it, I set up a .NET project as follows. This was done on a Mac running OS X, so the commands are Unix-style, not Windows-style, even though it’s a .NET project.

The dotnet tooling generates a test module with a single test case that verifies “true” is equal to “true”. Before making any changes to the generated artifacts, I executed the test:

You might wonder why anyone would bother running a test case like that. When you have a new setup for a greenfield project, the first thing you want to do is make sure the tools are configured properly. If that trivial test case had not run, it would mean I’d made a mistake in setting up the project.

We don’t want to lay down a lot of code only to have a problem, and not be able to see the cause immediately. So, we check everything as we go along, in very small steps.

Where shall we begin? Do we need a comprehensive up-front design? I don’t think so, in this case. The construction of logical units out of logic gates is a solved problem. All we have to do is look up some documentation and examples.

We’ve all had a little exposure to basic computer science, either through school or experience or general interest, so we know all the various Boolean logical operations can be built as simple circuits known as “gates.” Each type of gate is named for the logical operation it implements, such as AND and XOR and so forth.

We may or may not remember (but can find out quickly enough) that the NAND and NOR gates are the universal gates, because all the others can be built using one of these as building blocks. Of the two, NAND is the simpler. So, let’s begin our exploration of F# by writing a function that simulates a NAND gate. Wikipedia happens to have a nice writeup about NAND gates and another description of NAND logic we can use as guides.

Of course, we want to test-drive our code. That goes without saying. (Yes, I know; I said it anyway.)

Here’s the MIL/ANSI symbol for a NAND gate:

It has two inputs and one output. According to our documentation, when both inputs are true, the output is false. Otherwise, the output is true. Here’s a truth table from Wikipedia showing this behavior: 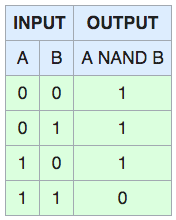 From this, we know the behavior we want our function to exhibit, and we can write microtest cases to assert that behavior. Those microtests will help us write the appropriate code.

At this point I wasn’t sure whether it made more sense to use true/false or 1/0 for the values. I chose to start with true/false and see how things went. When we start combining our “gates” we might decide to change this.

This is one of the handy things about test-driven development: Because we work in very small steps and we can always tell when something isn’t working as expected, it’s relatively easy to change gears when it becomes necessary.

I removed the generated test case and added a reference to the AluSimulator project, and wrote this initial test case:

I could tell two things from this output. First, it appears that the initial test case failed for “the right reason,” as I haven’t written a function named nand yet. Second, I think I’m going to like the helpful error messages generated from this tool.

But after I defined the nand function, the test runner still did not seem to be able to find it. Eventually I saw that the file AluSimulator.fsproj contained the following specification:

I had written my code in a file named ALU.fs. The file Library.fs was a boilerplate sample file generated by the dotnet tooling. After changing the specification to this:

the test case ran successfully. I fleshed out the remaining behaviors, and had my first simulated logic gate!

Well, I’m excited now. I just test-drove my very first F# function. What’s next? I’m thinking a NOT gate. What do you think? Yeah? Okay, cool. NOT gate, it is.

It would be pretty simple to write a function to mimic the behavior of a NOT gate. It might look something like this:

Here’s a representative example of the kind of hardware component we’re talking about: A single two-input NAND gate from Texas Instruments. There are many other products like this. All the other logic gates can be constructed by wiring these together in different ways.

I think it would be fun to duplicate that process in software.

Consulting the official Wikipedia documentation, we learn this is how to make a NOT gate out of NAND building blocks: 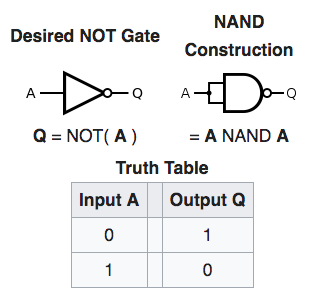 From that, we can see the behavior we want the NOT gate to exhibit. Let’s express that behavior in the form of microtests:

Okay, you’re right. My bad. It’s not good TDD form to write two failing tests before writing any code. It’s supposed to be one at a time. I’m skipping ahead a bit in the interest of space. It’s only a blog post, you know.

Anyway, long story short, the tests failed for the right reason, and I wrote the following code to make them pass:

That code is nothing more than the picture from the Wikipedia article written as text.

Don’t worry, I’m not going to step through every single gate function in excruciating detail. We’ve established the pattern we’ll follow to code all the remaining logic gates. But the AND gate is an interesting case. If we were doing a pure software thing, the andGate function would be pretty simple:

But to build this out of NAND gates, it looks like this: 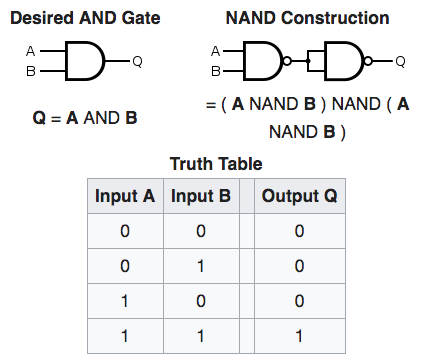 Driving from these microtest cases:

I came up with the following implementation:

To a software person, that loooks pretty convoluted. If we were building this in hardware, it would make a lot of sense to build it this way.

At this point, something is starting to happen that often happens when we use a test-driven approach to development. We’ve accumulated several microtest cases that look very similar to one another. We’re starting to wonder whether we can simplify the tests.

So far, we’ve been writing example-based cases. When the code under test handles various combinations of inputs in a consistent way to produce deterministic results, it’s often helpful to write data-driven cases. Here’s how the examples for the addGate function can be re-cast as data-driven cases:

At this point, I went back and changed the example-based cases to data-driven cases. I think it made for a simpler pattern to follow when building the remaining logic gate functions.

If we can make an ALU out of NAND gates, then what’s the point of building all the other types of logic gates? Maybe not much, for purposes of this exercise. Let’s go ahead and make something out of our NAND gates.

A half adder is a circuit that performs binary addition of two bits. There’s a nice write-up on Electronics Hub that explains various ways to combine logic gates to build a half adder, and how to make a full adder by combining two half adders.

A half adder takes two input bits, A and B, and produces two output bits, the Sum and the Carry bit. We can model that behavior in software with a function that takes two boolean arguments and produces a tuple containing two boolean values. We can summarize the behavior in a truth table (this image borrowed from the Electronics Hub article cited above): 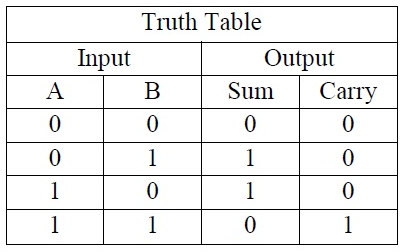 We can express that behavior in Xunit test cases as follows:

where the first two values are the input bits, the third value is the sum, and the fourth value is the carry bit.

You need five NAND gates to build a half adder, and my implementation code mirrors that in a naive way.

I suspect someone who had more than 90 minutes experience with F# could do the same thing in a more concise and idiomatic way. As for me: I was happy to get to green. Simple pleasures, and all that.

There’s more than one way to build a full adder. Let’s stick with our plan to make everything out of NAND gates. Here’s the truth table for a full adder. Thanks again to the Electronics Hub article for the image. 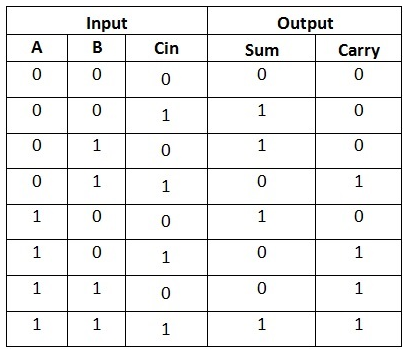 The truth table lays out the behavior that we want to see from our full adder function. Let’s express that behavior as an Xunit test case.

Building this naively based on the block diagram in the article, we have the following implementation:

Full Adder with OR Gate

Now we have a half adder and a full adder, all made from NAND gates. But we could make a full adder by connecting two half adders, if we had an OR gate. Let’s test-drive an OR gate function and try that approach.

This Wikipedia article shows how to make an OR gate from NAND gates: 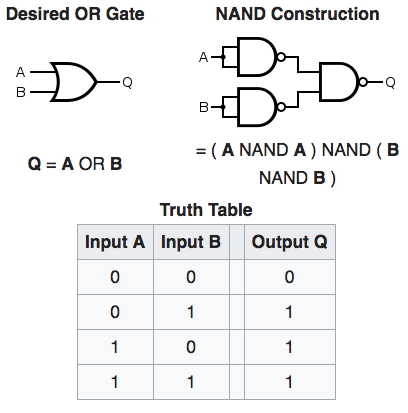 That leads us to this test case:

Implementing the OR gate with NAND gates looks like this:

Now armed with an OR gate, we can wire two half adders together to make a full adder, as described here:

That implementation is slightly simpler and cleaner than the first, although still pretty naive. A good F# programmer could do better. Anyway, I enjoyed getting my feet wet with these tools.

Not much of an ALU

Fortunately, there isn’t really a hard-and-fast definition of what functionality must be present before we can call something an ALU. We can declare victory at this point, for immediate purposes.

I leave it as an exercise for the reader to build one of these…if you dare. 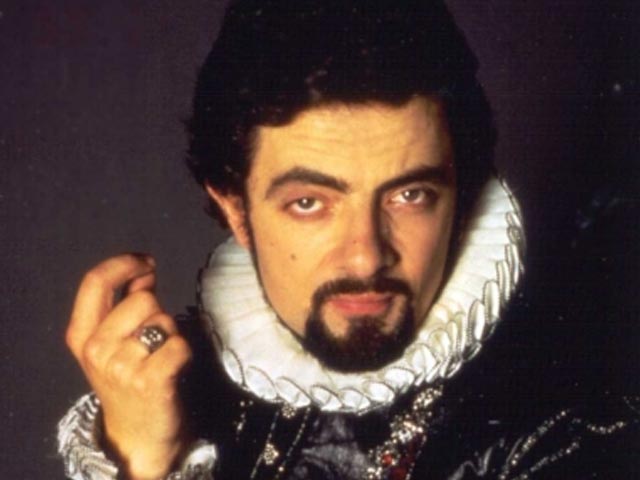 By the way, here’s the code, in case you’re interested: https://github.com/neopragma/alu-simulator.