Paulo Coelho wrote a nice piece about how cats came to be regarded as necessary for meditation for a few generations in Japan. The story might resonate with just about anyone in just about any context.

In my case, it reminded me of longstanding assumptions about how things “must” be done in the IT field. The following quote sums up the state of corporate IT in a nutshell: “..society continues to create some systems which, in the fullness of time, lose their reason for existence, but continue to impose their rules.”

This is how the assumptions, standards, and all the certifiable things in our field originated: 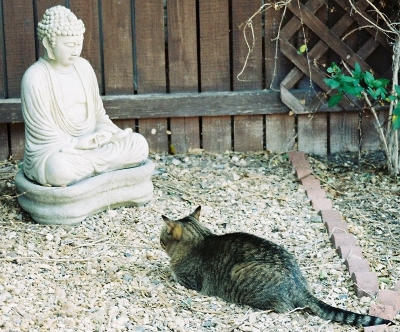 (Aside: Yeah, I could reduce that to four or five syllables if I really wanted to. Believe it.)

cats they herded in large numbers
each one claiming special thunder
cats, they claimed, avoided blunders
in the art of software-making

software needs much help to grow
special departments, special roles
line them up all in a row
for the art of software-making

prince they crowned, and then prince two
maturity models just for you
pee ‘im eye and scrum-de-doo
for the art of software-making

magic bullets don’t exist
except for ours, they all insist
ours is the cat that will persist
in the art of software-making

…and that brings us up to the present. Guess what happens next or be condemned to repeat history. (Hint: We’ve reached “schools of thought divided and mutually derided.”)

It would be inconceivable to deliver software without these cats.

And you already understand that eye tea can only be tears: The most common result IT departments produce for their customers.

If we all worked on the assumption that what is accepted as true were really true, there would be little hope of advance.
Orville Wright

‘Scuse me while I cough up a hairball.